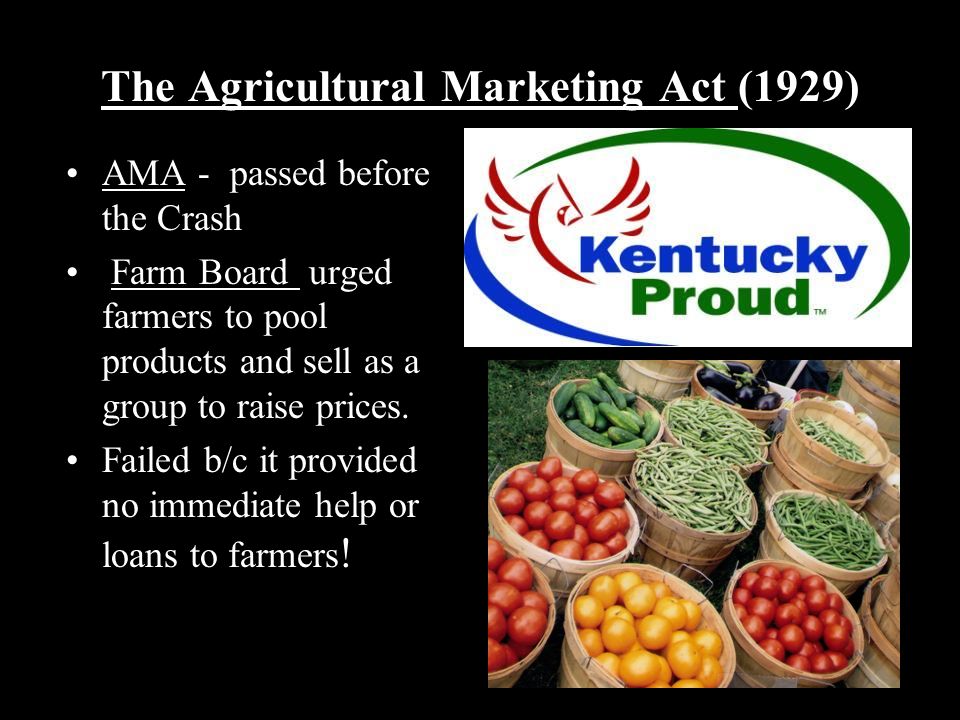 The Agricultural Marketing Act of 1929 was an important law that helped farmers get paid more for their crops. Farmers were suffering in the Great Depression and were struggling to survive. In addition, bad weather and living conditions meant people became sick and died. Congress decided that helping farmers with prices and marketing would help them overcome these problems. The Agricultural Marketing Act of 1929 was the first step towards improving the way farmers are paid.

When this act was passed, the prices of crops had fallen so low that farmers were forced to sell them directly to consumers. The farmers, worried about their lack of income, organized protests. Some farmers were burning crops and dumping milk on highways. The Iowan Farmers’ Union organized a Farmers Holiday Association, led by Milo Reno, and planned a “farmers holiday.”

The Act also created a voluntary production control program for ag products. Farmers were encouraged to sell surplus crops to the government, resulting in higher prices for farmers. However, this voluntary system had an enormous flaw, which prevented the government from combating deflation. The act also increased taxes on the companies that processed farm products. These companies included textile mills, meat packing houses, and flour mills.

The Depression hit agricultural America hard. The first years of the Great Depression were a time of high prices and surpluses, but by the end of the decade, production had fallen to the point of overproduction. The fall in prices further weakened farm income. In the 1920s, farmers had to sell excess crops to pay bills. Then, a stock market crash made the situation worse. Agricultural markets were in the worst state in American history.

As a result of the Great Depression, the Federal Farm Board was established in July of 1929. It was responsible for the creation of three nation-wide cooperative marketing corporations – the Farmers’ National Grain Corporation, the National Wool Marketing Corporation, and the American Cotton Cooperative Association. To date, the Federal Farm Board has authorized loans of $60,000,000 to co-op associations, helping them survive the crisis.

The Great Depression had many negative effects on American farmers, but the Agricultural Marketing Act of 1929 was a major step forward. This law helped farmers get back on their feet and improve their living standards. After the Great Depression, the agricultural market grew dramatically and American farmers were able to sell their produce at much higher prices than other U.S. workers. As a result, their purchasing power had increased significantly, giving them a much higher standard of living.

The Agricultural Marketing Act of 1929 is amended in 1933 and 1935. The Act transfers powers from the Farm Board to the Farm Credit Administration. This independent agency is an executive branch of the government that aims to establish a farm marketing system. There are many benefits of this law. One of them is the creation of the Farm Credit System. This law helps farmers receive loans and improve the quality of their products. It has also increased the number of small farmers.